My friend Jane and I were talking the other day about how this year* seemed to be a particularly bland one for music. Is it the recession? The splintering of musical audiences? Or was everyone waiting for the holiday season to release their good music, the way movie studios release their Oscar hopefuls close to the winter holidays?

In a separate conversation, my friend Jens and I also wondered if it was because there was too much access to too much music in general. Back in the day, I’d play Remain in Light and The Joshua Tree and Wish You Were Here and Synchronicity and The Head on the Door and Hatful of Hollow over and over because those were all I could afford on a high schooler’s allowance, and those became, by default, the albums I was most excited about. Now, every musical obscurity could practically be had for free on the internet, each new release streamed on demand.

Or maybe I’m just getting old.

But really, what is going on? For the last few years now, Pitchfork seems to be hyping one unGoogleable band from Brooklyn after another, their music interchangeable and forgettable. I look at the lineup of the shows at the Independent and I don’t recognize half of the bands anymore.

The other month I preordered a bunch of fall albums from bands/singers I love — Wilco, Tom Waits, Bjork** — and realized I couldn’t even remember a single track from their previous albums. And that goes for my highly anticipated releases this year that I should have loved: The King of Limbs? Gloss Drop? Stone Rollin’? Let England Shake? Cannibal Courtship? Watch the Throne? They’re all from folks I love, in varying degrees (Radiohead, Battles, Raphael Saadiq, PJ Harvey, Dengue Fever, and Jay-Z / Kanye West, respectively), and the albums aren’t dull or bad by any means, but they suffer from the affliction of being merely… okay. (Back in the day I thought Polly Jean Harvey and Bjork were these two twin goddesses of music, but only recently I realized that their really good albums — and I mean really good — were released in 1995 and 1997 respectively.)

Nonetheless, there were numerous bright spots in 2011, and I’m happy to share what tickled my ears this year. Here they are in no particular order, with a Spotify playlist to accompany your reading.

The Sea and Cake

Here’s a band, old by current standards, out with a new EP, and we find them stretching their boundaries, like Stereolab did on Cobra and Phases Group Play in the Milky Night. The title track, for instance, is a floaty synthesizer composition right out of a Jean-Michel Jarre album from the ’70s, then it shifts back into their deceptively low-key cocktail-lounge rock. There’s even a ten-minute jam (“Inn Keeping”) like a Tortoise track without all the changes. The Sea and Cake may not be the most unpredictable band around; their albums are consistently good, but they’re fairly interchangeable, and it would take a very careful listener (not myself) to figure out the difference between them. This EP, just a little over half an hour, is the equivalent of a comfort snack, and there’s nothing wrong with that.

Maybe brevity is the key. Next on my non-ordered list is Emily King’s The Seven EP, which is genuinely lovely curl-up-on-a-sofa-with-your-honey folky soul. “Down,” “No More Room” and “Radio” sound like instant classics to my ears. All you folks who loved, say, Corinne Bailey Rae’s melancholy album The Sea from last year should check this out. 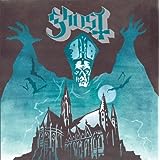 Ghost — not to be confused with the Japanese psychedelic band Ghost — is a Swedish band that prefers to remain anonymous, its lead singer performing in a skull mask and Pope costume. Honestly, their first album from 2010, Opus Eponymous, is the most fun I’ve had singing along to the most unabashedly melodic rock-and-roll songs about human sacrifice, Elizabeth Bathory, and Satan. An unholy cross between Mercyful Fate and Blue Oyster Cult, Ghost is clearly meant to be taken with tongue somewhat in cheek, but the music is too damn good to be just a parody. Bonus points for ripping off the Salem’s Lot cover.

You might say the same for Blood Ceremony — that is, the music is too damn good to be a parody — whose two albums (I prefer the self-titled first one) trump recent output by Electric Wizard and bands of the same shaggy ilk not just because they play scuzzy metal with giant Black Sabbath riffs and lyrics about pagan worship, but also because they have a fantastic female lead singer by the name of Alia O’Brien. And she plays the FLUTE. And they get away with couplets like “They smoke black drugs with Saturn’s bong / And blast our mind with evil song.”

This album will probably be duking it out at the top of the critics’ lists at year’s end (probably against Girls’ Father, Son, Holy Ghost, which I should listen to more), and for good reason: it’s ornery and relentlessly inventive and sounds little like anything else out there — a poppier Red Krayola, maybe? Merrill Garbus’s voice may be an acquired taste — shrill and grating one moment (like on “Gangsta”), crooning a lullaby next (like on “Powa”) — but it’s the real draw here.

Dawes’ North Hills album was one of my favorites of 2009 (but I also loved their previous incarnation, Simon Dawes) and while their somewhat uneven second album doesn’t break new ground, there’s a lot to be said for solid, exuberant American rock and roll. Dawes (and their vocal harmonies) channel the Laurel Canyon strand of American songwriting: introspection, longing, moments of minor epiphany, girls who bailed.

I first heard this album on headphones late one cold night in an empty apartment, and it scared the hell out of me. One of the tracks on his previous album, Theory of Machines, is entitled “We Love You Michael Gira,” but Frost’s chilling soundscapes are less reminiscent of Swans than of early-period Coil instrumentals. Feral, majestic, terrifying.

One might say this was the year hip-hop became dangerous again — the sort of music you wouldn’t want your mom to hear — with Tyler, the Creator’s psychotic fantasies emerging from the underground, and Death Grips’ sonic assault of a debut album, Exmilitary. It’s all seething hostility that bludgeons the listener. Drummer Zach Hill from Hella is the most prominent musician here, but it’s MC Ride’s aggressive, shouted vocals that are the real weapon, with lyrics sourced from drug-addled paranoia and anti-capitalist politics (it’s probably one reason you can download the whole album for free). “I am the beast I worship,” he sings in the refrain from “Beware;” the listener should take heed. Probably my favorite new group, and the best hip-hop album (or whatever it is: noise, punk, psychedelia) I’ve heard in years.

And now, three dance compilations that I recommend with some slight reservations, if only because two of them are so unlike me. Sofrito: Tropical Discotheque is impeccably curated by DJ Hugo Mendez, and it’s all there in the title: cumbia, descarga, soca, porro, soukous.

The two other compilations are cut from the same cloth, right down to the covers’ attention to boobs, though one is more strictly moombahton (apparently that’s reggaeton + Dutch House) and the other, Latin pop fodder. They’re relentless, immense, disposable, stoopid and borderline-annoying dancefloor fillers, and I’d probably be hugely embarrassed to be caught dancing to these, but what the hell.

Wild and woolly and all over the place, The Hunter is the antithesis to Mastodon’s concept albums of yore — no thematic links this time, just a collection of brawny, muscular songs. One might see it as an album full of small highlights, and there are many: the vocal harmonies on “Black Tongue,” the curlicues of guitar on “Octopus Has No Friends,” Brann Dailor’s relentless drum fills, the Pink Floydian intro to “Creature Lives.” Dare I say they may be America’s best mainstream metal band?

The mighty Japanese doom/sludge metal band Corrupted releases another album of glacial slowness: epic in length, massive in scale. The detuned guitars and guttural vocals (in Japanese, this time; they’re usually in Spanish) contribute to the tension, but it’s not all monotone in execution: towards the end of “Garten,” we’re led into what sounds like a crescendo, but instead unexpectedly veers into the melancholy solo guitar of “Against the Darkest Days.” (It’s almost as radical as that piano break towards the end of Harvey Milk’s album from last year, A Small Turn of Human Kindness.) Still, it’s Corrupted’s monomaniacal devotion to heaviness and duration that fascinates me most. Think of black holes and lumbering dinosaurs and desolation writ large and you’ll get the picture.

Almost as polarizing as that black-metal / false-metal release from this year (Liturgy’s Aesthethica), Kvelertak’s debut album does come perilously close to frat-rat screamo deathcore and all that implies. But I gotta tell ya, I had a lot of fun listening to this Norwegian sextet’s potent mix of punk, hardcore, death metal and good old-fashioned Motörhead-style rock and roll. With a few blast beats thrown in for good measure, which got all the black metal purists’ underwear in a twist.

Cornershop and the Double-O Groove of (2011)

I haven’t really thought about Cornershop in over a decade, when “Brimful of Asha” (and Norman Cook’s remix of it) hit the airwaves back in the late ’90s. Back then they were one of the chief musical proponents of a giddy cosmopolitanism, along with (perhaps) Dee-Lite and Pizzicato Five. The crossing of “World Music” (a term I dislike) with Western pop sensibilities never really went away — two of the past decade’s biggest acts, Vampire Weekend and M.I.A. took that cross-pollination quite far — but Cornershop always had a political element that was rooted precisely in its Indian-in-England identity. (Note their cover/reclamation of the Beatles’ “Norwegian Wood,” for instance.) Cornershop and the Double-O Groove of doesn’t feature Tjinder Singh on vocals though, but Punjabi singer Bubbley Kaur; the result is effervescent (sorry, I went there), exuberant pop for the ages. Probably the happiest album I have on this list, and fitting background music to close out 2011.

*I never did come out with my big list of favorite songs/albums from 2010 — something I do every December — and it’s partly because I was both really busy with other kinds of writing and I couldn’t reconstruct my playlists after iTunes failed me again.

I’m sure I did come up with a provisional Top 10 list of songs I loved that year (and I think only two actually came out in 2010), which went something like:

But now I can’t recall the rest.

** I’ve played them repeatedly since; The Whole Love and Bad as Me are better albums than their direct predecessors, but they seem rather overstuffed and in need of trimming. But Bad as Me may be Waits’ best since 1999’s The Mule Variations, which is saying a lot. Biophilia finds Bjork in full-on art song mode, with multitracked vocals and more wailing and dated drum-and-bass beats that pop up incongruously. It’s as fun as it sounds.

First I’ve heard of the new Cornershop album. Getting it now! Check out a playlist I did of my novel, “From the Memoirs of a Non-Enemy Combatant,” over at largeheartedboy.com. It’s about a small Filipino man with big dreams about America. The songs speak to his predicament in the America’s most notorious prison.