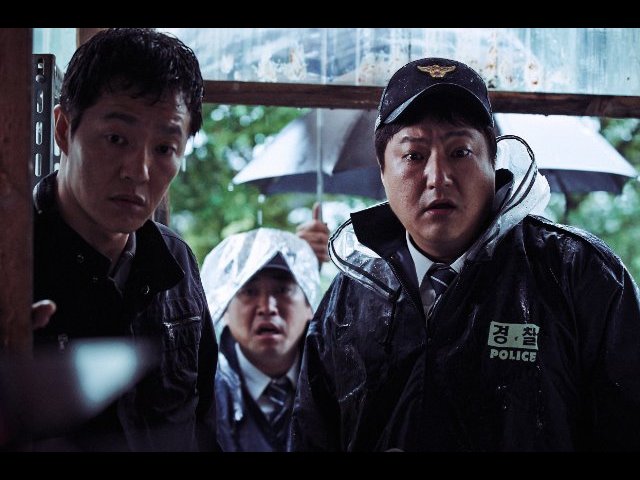 It wasn’t quite what I expected: there’s a detour to what seems like a serial killer’s lair, complete with a shrine to victims and all, until the last half of the film ends up as a vaguely apocalyptic tussle, The Exorcist-style, between different spiritual forces. (I mention The Exorcist for comparison only because there’s a little girl involved, but it’s probably a lazy Western reference; there are clear elements of Korean spiritualism in the film that are lost to me.)

Worth watching, if you’re intrigued by the combination, but it doesn’t quite gel together. There’s a lot of padding over its two and a half hours’ length: a three-way scene that crosscuts between two drum-heavy rituals and a possessed child goes on way too long. The acting, especially from protagonist Kwak Do-won, ranges from a mild buffoonery to over-the-top hysterical camp. I lost track of the times he fell to the ground, cowering in fear. And, living up to the title, there’s a lot of wailing. A whole lot.

Nonetheless, the decay is gorgeous to look at: the forests practically drip in green, the crime scenes are suitably grubby and abattoirish, and the night is a deep blue just outside the safety of pools of light.

The Wailing also happens to be at least the third Korean movie I’ve seen whose very plot depends on the spectacular inadequacy of the police: poor handling of evidence, avenues of investigation ignored until they’re too late, etc. (Bong Joon-Ho’s early masterwork from 2003, Memories of Murder, is one example, complete with actual pratfalls.) I couldn’t figure out where I’d seen this theme before, only to remember 2008’s The Chaser — to my surprise, also directed by Na.

In The Wailing, this ineptitude has both humorous and serious consequences. In one scene, the two partners hide in a darkened police station, terrified of a woman who has appeared at the window during a flash of lightning; it’s a classic horror-comedy setup. But in another scene, crucial evidence is missed because one cop simply isn’t looking, and the other is too terrified to confront what he just saw. American movies typically include the stereotypical bumbling cop in comedies, but not in procedurals; The Wailing (and the other movies I mentioned above) show the police as both.

It’s a disquieting movie on the nature of evil: the “good guys” are either too powerless against the malevolence, or simply too incompetent to do so, and the protagonists’ desperation lead them to make more and more questionable decisions. Watch it if you must, but be prepared to get lost in a rabbit hole of spoiler discussions on the net later.

I liked this movie just because it refuses to play by the rules of narrative conventions–although it took a bit of getting used to I enjoyed the way it veered from one genre to another, and from one focus to another. It’s one of the things I enjoy about a lot of Asian cinema. Whether that was by design or not I’m not sure but the effect is crazy & kept me off-kilter for most of the film’s running time. The manic shifts did become a bit tiring by the end of the movie but its sheer energy was enough to make me watch it ’til the end. Mystery resolved? Plot explained? Perps identified? Nah. But somehow it was still alright with me.